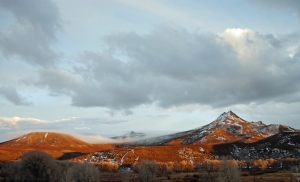 Sunset over Flattop and Squaw Mountain

It always feels like we dive down the rabbit hole on about April 15th, and don’t come out until after the Fourth of July.  By mid-April, we were well into calving, and getting set to trail the ewes south from their Red Desert wintering grounds.  Since they start lambing around May 8th, it is important for them to be sheared before then.  We also need to fit in several brandings for the calves.

This year has been especially challenging because we are very short-handed.  For an unknown and possibly unsolvable reason, the American Embassy in Lima, Peru, turned down two of the herders we were counting on for lambing, including our longest term employee, Oscar Payano.

We were a little late getting on the trail with the sheep because two major storms “blew out” the sheep, meaning that the wind blew so hard that the sheep just walked before the storm and scattered over many miles.  Twice they mixed with a neighboring band of sheep.  This all had to be sorted out before we could start the 90-mile trail to the lambing grounds.  It did give us snow to trail on, since most of the reservoirs were dry.  (Sheep can survive by eating snow in lieu of fresh water.)

We also had the adventure of working with a new sheep shearer.  Our old shearing contractor, Rod, sold his business and retired to New Zealand with his wife, three-year-old daughter and newborn twin sons.  The new shearer proved to be less than ideal during the 2012 shearing (conscientious, but slow).  For this season, Meghan engaged a reputable shearer, but that crew also ran late due to the April storms.

In the meantime, we shanghaied our in-laws and recruited our friends and neighbors so that we could raise branding crews.

The excellent news is that we have been gifted with timely spring rains–not too cold, not too stormy.  The grass is growing and life is good (except for the absence of Oscar). 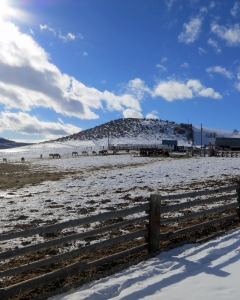 horses on the feed line

Posted by Ladder Ranch on May 31, 2013 in Animals, Cattle, Family, Folks, Folks who help us out, Llamas, Peruvian sheepherders, Sheep

Seamus riding into the sunset..

Posted by Ladder Ranch on May 22, 2013 in Animals, Nature and Wildlife 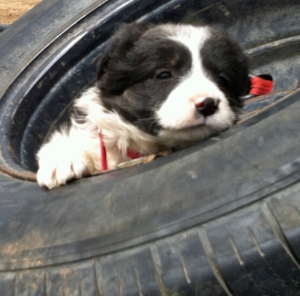 Shearing through the eyes of students

This year, our shearing crew arrived late.  This meant that the ewes trailed, in the wool, to the Cottonwood lambing grounds to get shorn.  Many years, we shear them in the Badwater pasture, some 45 miles north, then trail them on to the lambing grounds north of Dixon.  This has to be done before May 1st if they are to have time to travel and be in the private, BLM and State lands when they start to lamb a week later.

Dixon is close to our community school in Baggs, and many years third-grade teacher, Miss Cobb, brings her students to watch shearing and learn about it. This year, it was easy, since the shearers were so close.  The third graders were joined by the fourth grade class and their teacher, Mrs. Herold.

Cliff Hoopes, the shearing contractor, took time to show the students around.  He even brought them, five at a time, into the shed so they could watch the shearers at work.  This year’s shearing crew included one man from Japan, which was a first.

We were starting to lamb by the time the last sheep was sheared. 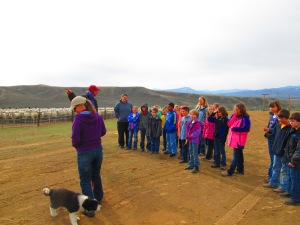 Siobhan, Meghan and Filo bring up the unshorn ewes

Pepe sorting at the chute 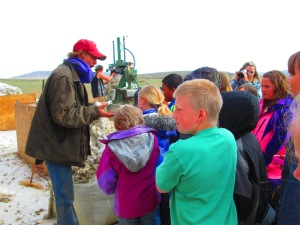 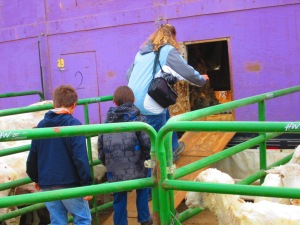 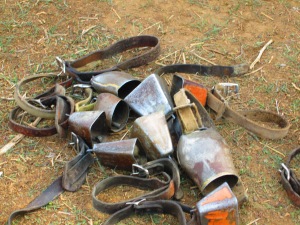 Cliff and Landon inside the shed

Posted by Ladder Ranch on May 10, 2013 in Animals, Events, Folks, Folks who help us out, Peruvian sheepherders, Sheep