The ones who stayed behind (click on the link)

Posted by Ladder Ranch on January 17, 2020 in Animals, Nature and Wildlife, Sheep 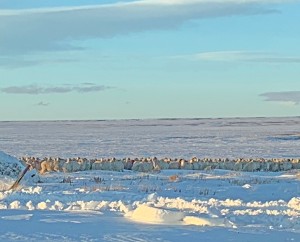 Our decision to move most of the ewes north was not an easy one. We have never not kept them (relatively) close to home on desert sagebrush steppe grazing permits. Last February, our sheep were trapped by bad weather and roads. When this winter started early and hard, we bought extra feed and hauled it to them daily, hoping for a thaw. We did not have back-to-back blizzards like last February, but it has just kept snowing and getting colder. Eamon found sugar beets which had frozen in the ground in the Big Horn Basin. After lots of phone calls and planning, we started loading ewes, and rams, on trucks and moving them to beet fields and crop aftermath in the north part of the state. Most of them had never seen a truck. 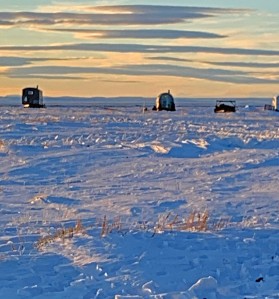 Meghan bringing them up 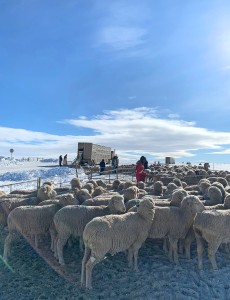 Pat and Pepe at Cyclone Rim 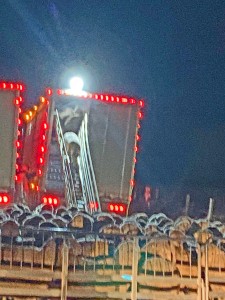 unloading the trucks in the dark

the first day of the rest of the winter 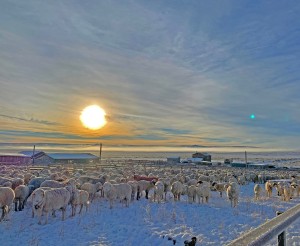 Ready for the trucks

Here’s more photos from sorting the sheep, Who will head north for the winter and who will stay at Powder Flat? The ewe lambs and the younger ewes go to sugar beets and crop aftermath near Burlington. The older ewes and peewee lambs will receive special care at our Powder Flat ranch. 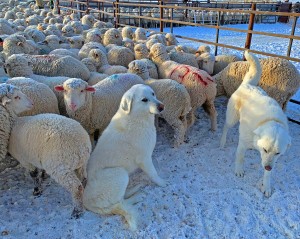 heading up the alleyway 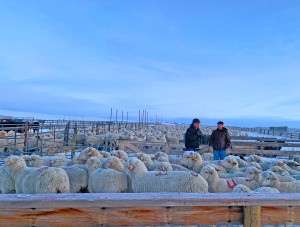 Eamon and Ned, the brand inspector 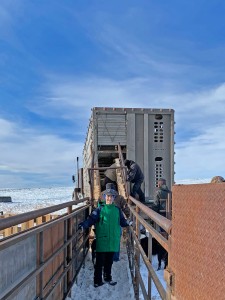 Seamus in the chute 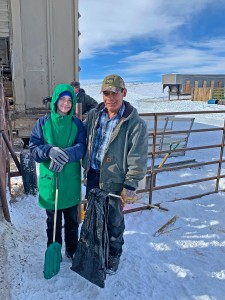 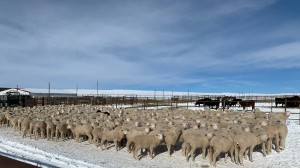 horses, sheep and cows, oh my! 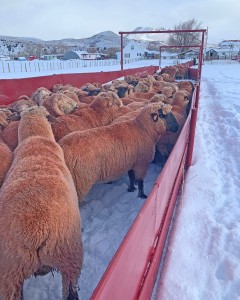 Bucks in the chute

December romance
Sweet nothings from powdered rams,
lead to lambs in May. 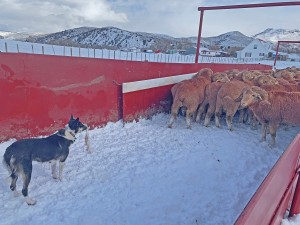 Cora bringing them up

off to find the ladies 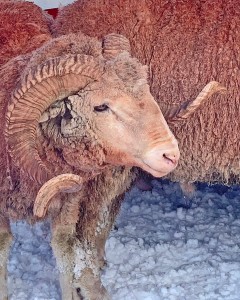 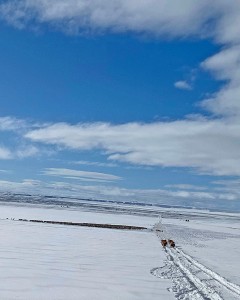 Ewes and rams still standing in a triangle,
Too much snow to go out to graze.
Cake this morning, but not moving
out to that brushy hill not so far away.
Tomorrow—cake, then hay,
then out to that hillside with dry grass,
low brush. Food and shelter.
Time to move from the triangle,
spread like stars seeking space.
Leave a comment

Posted by Ladder Ranch on December 26, 2019 in Animals, Nature and Wildlife, Poetry, Sheep

The Night Before Christmas on the Wintering Ground

with apologies to Clement Clark Moore

When what to their wondering eyes should appear

‘Twas the night before Christmas, when all through the ranch,
not a creature was stirring ‘neath sage nor on branch.
The feed pile was heaped, all ready for morn.
when sheep could devour their sweet breakfast corn.

The ewe lambs were nestled all snug in the brush
while ‘round them ewes lay still in the hush,
near bucks red with paint, their bright metal bells,
reflected the moonlight’s wintery spells.

Then out in the desert there arose such a clatter,
the guard dogs leaped up to see what was the matter.
Away to the bedground they flew in a flash
barking and growling, on alert for a clash.

The moon on the sage flat showed new-fallen snow,
giving lustre of midday to sheep bedded below,
when, what to their wondering eyes should appear,
but Santa’s own feed wagon, pulled by Mule deer.

The feed sled it brimmed with alfalfa and hay—
this wagon he pulled instead of a sleigh.
More rapid than pronghorns, his coursers they came.
He whistled and shouted and called them by name.

“On Bucky, on Bambi, on Fawna and Devin,
on Woody, on Forest, on Jumper and Kevin,
to the top of the rim, we’ll fly with good cheer,
With a nose glowing green, our leader, John Deere!”

As ice flakes that before the wild blizzard they fly,
through snowstorms and wind, they mount to the sky,
and up to the sheep wagon, on to the feed ground,
came Santa’s sled, where goodies abound.

With Santa attired in Scotch cap and wool,
in fleece-lined gloves—his white beard so full—
he wore arctic Sorels, a snug Carhartt coat
a red and green glad rag covered his throat!

His eyes how they twinkled, his nose how it froze!
He blessed his wool socks, which made comfy his toes!
Above that warm beard, his cheeks were all rosy.
He was glad for his woolens, which kept him all cozy.

The wagon’s pipe glowed, from the fire beneath,
while woodsmoke encircled the camp like a wreath.
He had a broad face, and a round little tummy—
all those cookies and milk—those goodies were yummy.

He was chubby and plump, like a ewe eating corn.
He went right to work, for soon would come morn.
He winked and he whistled, the dogs soon drew near,
Border collies and guard dogs looked up at his deer.

For herders he brought new winter attire,
and coal for their stockings to add to the fire.
The dogs all got bones, still covered with meat,
new coats for the horses, from heads to their feet.

For the sheep, Christmas magic, with a nod of his head,
their fleece grew an inch to warm their chill bed.
He gave ewes a blessing:  they’d all carry twins,
for this winter season is when it begins.

He mounted the wagon, called, “Gee” to his team
and off they all soared like a sheepherder’s dream.
Then I heard him exclaim as he flew with his deer,
Happy Christmas to all, and to all a good year!

The long journey to the wintering grounds 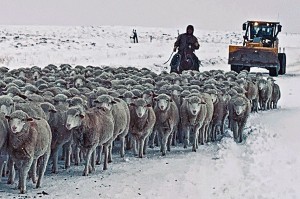 Ewes coming to the road

Most years, we set out on the sheep trail to the wintering grounds on about the same date. It is usually about a five- or six-day trail from our late fall pasture at Badwater to our winter grazing permits in the Red Desert. We leave around Thanksgiving time–grateful that the ewes have come south on the same trail in the spring, met the shearers. trekked to the lambing ground, borne and raised lambs, grazed on the forest, trailed back to the Home Ranch corrals, weaned their lambs, and now head north to winter pasture. It is usually a time when we can take a breath. We pray that the winter is not too hard, that the dry grass is enough to sustain the ewes, and then the rams, as the cycle begins anew.

This year, back-to-back blizzards hit soon after the first two bunches of sheep set out. Some days they have been stranded on the trail and it has been all we can do to reach the sheep and the herders with supplies. The Interstate has been closed, with multiple wrecks and even some deaths. We crossed two bunches in between storms, but have struggled to move them north, breaking trail with the tractor. The weather has paused between storms, allowing us to make progress. We are grateful that the storms have not been unrelenting.

We had to turn south with the last bunch. Their winter pasture on Chain Lakes is snowed under, and we’ve found another, more open, allotment to the south and west. We are trailing down the highway, which must confuse the ewes, whose instinct and habit is to head north. Since we are on the highway, and not the cross-country trail, we flag, fore and aft, to slow the oncoming traffic. Locals are also not used to seeing livestock on the road this time of year, and non-locals are mostly interested to see the sheep, the dogs, the herders and the family members.

The sheep north of the interstate are still struggling to get to Cyclone Rim. They have finally made it to a plowed road, but it is slow going due to all the trucks stuck as they try to reach the energy development in the same areas.

Eamon and Guillermo bringing up the sheep

almost to the gate

Wagon, waiting for the day 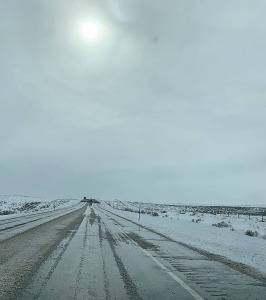 View from the rear flagger

Wilber and Guillermo putting in at the 18 mile marker